In the midst of today’s controversies about immigration in the United States, it’s good to remember that it has been a constant issue.  Today I came across a letter to the editor to the Pittsburgh Press on 15 August 1939 discussing the difficulties for an alien wishing to become a citizen.

The context was different than that of today, but the issues much the same.
Posted by Randall Bytwerk at 8:55 AM No comments:

Email ThisBlogThis!Share to TwitterShare to FacebookShare to Pinterest
Labels: Letters to the Editor

This cartoon is from the 25 August 1939 issue of the Pittsburgh Press, courtesy of Google News.  The Germans had just signed a non-aggression pact with the Soviet Union, astonishing just about everyone. 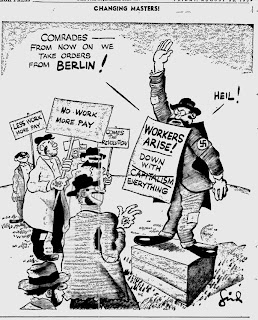 The cartoon pokes fun at the embarrassment of American Communists who suddenly found themselves today’s allies of yesterday’s enemy.
Posted by Randall Bytwerk at 8:29 AM No comments: 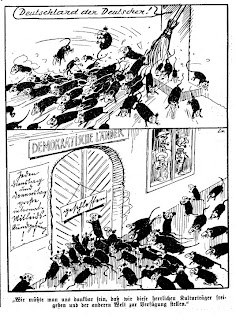 The cartoon reflects a section of Hitler’s 30 January 1939 speech that threatened “the annihilation of the Jewish race in Europe” in the event of war.
Posted by Randall Bytwerk at 10:25 AM No comments: