In mid-April 1939, Franklin Roosevelt sent a message encouraging peace to Hitler and Mussolini.  Hitler responded on 28 April 1939 with a two-and-a-half hour speech that scornfully rejected FDR’s message.  This cartoon from Julius Streicher’s anti-Semitic weekly Der Stürmer (#19/1939) shows FDR sliding down the manuscript of his peace message into Hell, where laughing devils wait. 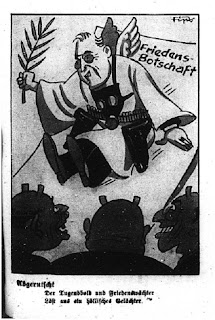 The caption translates: “Sliding down. The paragon of virtue and apostle of peace elicits hellish laughter.”
Posted by Randall Bytwerk at 2:53 PM No comments: