Lindbergh Flies to Paris in 1927

It’s hard today to imagine the excitement occasioned by Lindbergh’s solo flight to Paris in 1927. People sensed, I think, that the world had changed, that if today Lindbergh could fly alone to Paris, tomorrow they would be able to as well, if not by themselves.

Today I post two editorials from the Eugene Register-Guard. The first appeared on 21 May 1927, the day Lindbergh landed in Paris. In fact, the headline of the issue reports just that. This, however, was before the rapid pace of our day, and the editorial page had already been set in type before Lindbergh landed. The paper therefore hedged its bets, not knowing whether or not they had a triumph or a tragedy in store.  Lloyds of London, in fact, refused to insure Lindbergh’s flight.  It seemed too risky. 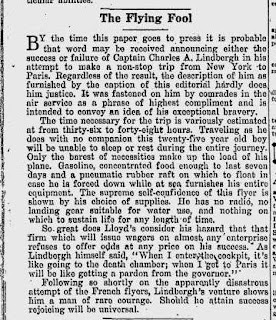 The editorial praised Lindbergh’s bravery, and left open the possibility of failure.

The second editorial appeared on 23 May 1927. Lindbergh was a hero, and now his example was put to use.  The country, the editorial notes, was still filled with valiant young people willing to follow Lindbergh’s example, if perhaps in a less spectacular fashion. And the Pacific Northwest was daring great things. 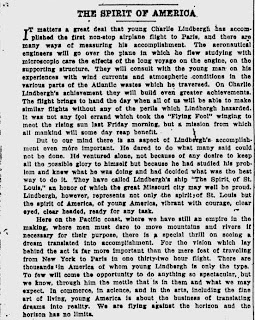 Others seized on Lindbergh’s example. The issue had an ad from a local department store about to open its new building. The ad claims that this, too, was an example of American spirit: “American Aviators and American Businessmen lead the world.” 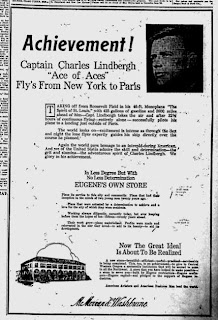 Posted by Randall Bytwerk at 1:49 PM No comments:

The 4th of July had always been an occasion for newspaper editorials.  Today I'm adding two rather different editorials from 1942.  The United States had been in the war for seven months, and things were not going well.  The Milwaukee Sentinel carried a rather typical editorial titled “Our Nation’s Natal Day” with general claims of how the nation needed to draw on its traditions to face the new crisis.

The Eugene Register-Guard took a more interesting approach. In an editorial titled “The Crisis Calls for Realism,” it frankly admitted that the war situation was grim.  The Germans were advancing on Egypt, the Japanese toward India.  And the Russians, while demanding resources, were unwilling to help us in the East.  It ends by complaining about “hazy thinking” in Washington.

Posted by Randall Bytwerk at 1:58 PM No comments: