The Sydney Daily Telegraph of 1 June 1908 discussed a major problem with the growing number of motor cars — dust.

It makes sense, given the lack of paved roads a the time, but pollution problems have gotten more serious since 1908.

Posted by Randall Bytwerk at 11:03 PM No comments:

FDR died on 12 April 1945.  His death gave temporary hope to the Nazis.  Pehaps his death would mean the collapse of the Allied coalition.  Here is what the Neue Warte am Inn (Braunau am Inn — Hitler’s birthplace) wrote on 18 April 1945 in one of its last issues.


Roosevelt, the Person Mainly Responsible for the War, Dies

The North American President Roosevelt died suddenly Thursday at his country home in Warm Springs at the age of 63.  The cause was a cerebral hemorrhage. Vice President Harry Truman assumed the office of USA president according to the constitution and has already been sworn in.  He said that he would try to carry out his offices as Roosevelt would have done. The war will be carried out on both fronts with full energy to its successful conclusion. Roosevelt was buried Sunday morning in Hyde Park. The news of Roosevelt’s death caused alarm in America and England.  The United Press said the death of the president was like a lost battle.

One of the greatest war criminals and political swindlers in world history has passed away. At the end of March Roosevelt ordered his cabinet and USA diplomatic representatives to prepare for the coming victory in Europe. Cabinet members were not to leave Washington. Now Roosevelt himself, who thought himself near the triumph of his life, has had to leave his post. He was the true cause of this terrible war. He began rearming the USA in 1933 and opposed the successes of the Munich Agreement in 1938. He promised American mothers that young American soldiers would not bleed in foreign wars. He quickly broke that promise. He lied to the American people by saying Germany wanted to conquer America. Roosevelt supported England in starting this war over the Polish question and he encouraged the Putschists in Belgrade to unleash the Balkans war. Although he always claimed the USA was neutral, he ordered that German submarines be attacked. Roosevelt also belonged to the vultures who profitted from German stocks as a a result of the dictate of Versailles.  The profiteers he lead persuaded American savers to speculate with German bonds. Roosevelt earned millions after Germany’s collapse from the money of small American savers.

We are filled with satisfaction at the death of the war criminal and Jewish lackey Roosevelt. We see it as God’s punishment, which lets us believe that the war that Roosevelt incited will find a just conclusion. Roosevelt died just as he was imagining victory. It reminds us of the divine providence of 20 July last year, when death stood all around the Führer and reaped its harvest. Roosevelt’s great counterpart was saved by a miracle. He is the only person who can guarantee that this war waged by the Jews, plutocrats, and Bolshevists will end as it must if history is to have any meaning. If we compare 20 July 1944 with 12 April 1945, we gain the strength that will give us the faith to move mountains.

Posted by Randall Bytwerk at 7:07 AM No comments:

The Japanese attack on Pearl Harbor caught the United States by surprise — and also resulted in all sorts of wild rumors.  On December 8, 1941, for example, the Associated Press reported a large Japanese force of bombers attempted to bomb San Francisco.

There was no foundation to the story — but in the shock that followed Pearl Harbor it seemed plausible to Americans.
Posted by Randall Bytwerk at 5:47 AM No comments:

Mark Twain a Hit in Melbourne

Mark Twain embarked on a round-the-world lecture tour in 1895.  Here is the Melbourne Argus’s report (28 September 1895) of his lecture there:


“MARK TWAIN” AT HOME.    LECTURE AT THE BIJOU THEATRE.


The author of the Innocents Abroad was “At Home” at the Bijou Theatre last night.   The celebrated humorist was at home in more senses than one. He strolled on to the stage in a manner that showed he felt himself among friends, and was   met with such a greeting from a crowded    audience as must have made him glad he did not in reality stay at home. To say that the audience represented even more in good feeling and enthusiasm than in dollars is to say a great deal, and yet preserve that close adherence to actual fact which has always distinguished Mark Twain himself and imparted to his books their most endearing element—trustworthiness. One touch of humour makes the whole world kin, and this was illustrated in the audience last night. That gentleman in the higher stage-box, who laughed   till his face was scarlet and banged the end of his walking-stick on the floor, was an archdeacon, and close to him  was a rural dean, backed by a number of the minor clergy, all cackling like school- boys. Beneath them sat an aged senator leaning over the rail of the dress circle, and swaying to and fro in most painful enjoyment. Down below a bookmaker led the laughter with an unceasing metallic roll. He was always in time for the good points, for he never stopped. The clergy was the most notable element in the assemblage. The Church of England Assembly had evidently adjourned to the theatre in a body, and the Catholic priests had come to take the first steps towards that union of which so much is heard. There were several Presbyterians laughing really hard—they were evidently not of the subjects requiring surgical operations. One burly Wesleyan exploded at  regular intervals in the gallery—in fact, white cravats and black coats were dotted all over the building. It is suspected that there were even some particular Baptists present, but on such a point one must speak with reserve. Everybody in Melbourne who could get into the building seemed to be there, and there never was an audience that seemed more convinced that it had got the worth of its money. For two hours there was a continuous roar of laughter, with the exception of a seven minute interval, and one or two places where the humorous and the pathetic met, and people did not quite know whether to laugh or cry. To a student of Mark Twain’s writings there was little that was new in the lecture, but all his odd, quaint turns were presented in their proper setting, so that for the first time one really realised what American humour actually is. There was the quiet, lazy drawl, the half closed eye. the confidential manner, leading one slyly away from the point of the story, so that it might be thrust in unawares amongst the small ribs by a sort of addendum or afterthought. And then a patient, resigned silence until the laugh was over, as if it was all an annoying interruption which had to be endured, though why they laughed the lecturer did not know. All this one had, of course, tried to imagine many times, but here was the real thing, only one felt that instead of a trim figure clad in regulation evening dress there should  have been a man in the costume with which caricatures have made us familiar, whittling a stick. The acknowledgment of the first burst of applause was drawled out in a nasal accent—anyhow, as it seemed—  and yet, on listening, it proved to bea sentence or two of most polished, perfect English, such as the Archdeacon himself might have been proud to utter. And just a little joke at the end as an afterthought. Someone from the gallery cried out twice, “Is he dead,  Mark?” The lecturer did not catch the remark the first time; the next time he   heard but did not understand. After the lecture he made special inquiries what that interjection meant. And yet the explanation was simple. It was an admirer paying back on him the mystification he inflicted on the poor guide who showed him the statute of Christopher Columbus. “Is the gentleman   dead?” For nearlv two hours the humourist went lazily onward, telling over again many of his best stories as only he can tell them. What a mixture of the terrible and the grotesque, the tale of the boy who discovered that the weather was too bad for school—just the sort of weather for fishing; who went fishing and returned to sleep in his father's office along with the corpse of a man killed in a street row; how he went away from there—not hurriedly, but still he went—through the window, taking the sash with him. What unutterable pathos in the voice of the man in the Jumping Frog who said, “I ain’t got no frog.” What real pathos in the struggle of the better nature of the loyal Huck Finn with the conscience which told him he would go to perdition if he did not betray the escaping nigger, “Jim.” It was Mark Twain, interpreted by Mark Twain. The same entertainment will be repeated tonight.


I take this from a project by the National Library of Australia to digitize long runs of newspapers.  They digitize the articles, and anyone may proofread the digitized versions and correct errors.

Posted by Randall Bytwerk at 7:19 PM No comments:

When Mark Twain died on 21 April 1910, the nation’s newspapers ran long obituaries.  Today I include the front-page cartoon and the major part of the obituary from The Spokesman-Review (Spokane),  Clicking on the image will bring up a larger version. 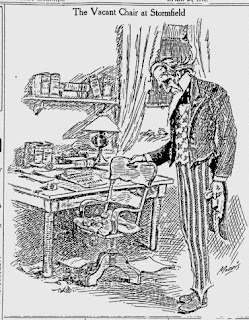 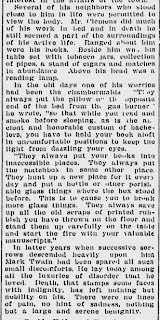 Posted by Randall Bytwerk at 4:53 PM No comments:

Executions are usually of interest.  This brief story from the Cripple Creek Mail (Colorado) of 14 December 1895 reports on a hanging in which the condemned man was refused permission to spring the trap himself. 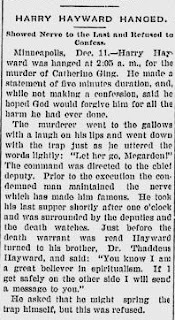 Posted by Randall Bytwerk at 4:08 PM No comments:

Email ThisBlogThis!Share to TwitterShare to FacebookShare to Pinterest
Labels: Executions

Teaching German During World War I

During World War  I school districts around the country stopped teaching German, “the language of the kaiser.”  This article from the 5 January 1918 issue of the Arcadia Journal (near Los Angeles) reports one such action.  Textbooks were “interned for the period of the war.” 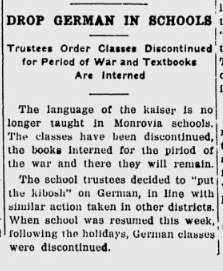 Elsewhere cities with German names found new ones.
Posted by Randall Bytwerk at 7:25 AM No comments: