I'm working through German newspapers at the moment for my current project.  This one comes from the  Wiener Neueste Nachrichten of 28 November 1941, courtesy of ANNO, the Austrian project to digitize long runs of newspapers.  When this appeared, the Nazi were beginning to realize that the attack on the Soviet Union was going to be more difficult than expected, but England still seemed defeated. 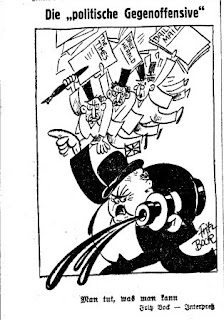 “One does what one can.”

The cartoon is titled “The ‘political counteroffensive.’”  Churchill’s only weapon is words, supplied by the Jewish journalists in the background.
Posted by Randall Bytwerk at 7:19 PM No comments: