A Nazi Reaction to D-Day

A few weeks after D-Day, the leading German weekly Das Reich ran this cartoon.  A battered American soldier wants to recover in Hell, since conditions there are better than for the Allied army attacking German’s “Atlantic Wall.”  The Nazis had put great effort into building fortifications — but in the event they were not sufficient to hold back the invasion. 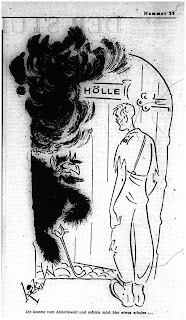 “I'm coming from the Atlantic Wall and would like to rest up here....”
Posted by Randall Bytwerk at 7:38 PM No comments: