Jim Crow in the Military during World War II

The U.S. has a long history of newspapers intended for a Black audience.  They make interesting reading. This article is from the Baltimore African-American, 2 February 1943.  A high-ranking Black officer had just resigned his post in the Pentagon because he saw that promises made to Blacks were not being met.  I also attach an editorial cartoon on the theme. The full newspaper is available on Google News. 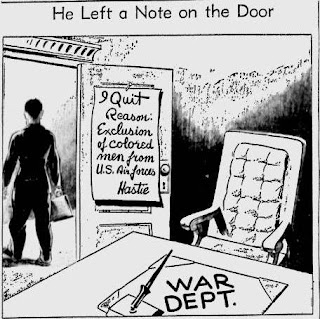 Posted by Randall Bytwerk at 4:27 PM No comments:

We still use the metaphor of a “train wreck,” but big train wrecks are rare today.  They were once more frequent.  The story here, taken from the Las Vegas Times of 5 May 1906, reports a huge wreck in Montana. According to the article, cars piled up 40 feet high. The conductor notes at the end that at least a dozen tramps were on board. The original is available on Google News.

Posted by Randall Bytwerk at 6:46 PM No comments:

Email ThisBlogThis!Share to TwitterShare to FacebookShare to Pinterest
Labels: Disasters

German Cartoon on the German-Soviet Pact of 1939

When Germany and the Soviet Union signed a non-aggression pact on 23 August 1939, World War II essentially began.  Hitler now felt free of the threat of a two-front war.  A little over a week later he turned his armies loose on Poland.

The agreement was a tremendous relief to Germans — it seemed another of Hitler’s diplomatic master strokes. This cartoon from the 25 August 1939 issue of the Freiburger Zeitung expressed the sense of relief. In the first frame, England and France are discussing how  to “encircle” Germany while Stalin listens quietly. In the second frame, France announces it will attack from the West. In the third frame, England announces it will attack by sea. In the final frame, against the backdrop “Non-Aggression Pact with Germany,” Stalin leaves saying “...and we won’t come at all!”

Posted by Randall Bytwerk at 11:14 AM No comments:

This 13 January 1900 article from the Pittsburgh Press reports an outraged judge. Despite his clear directions to the jury to find two men accused of illegally selling alcohol on Sundays guilty, the jury decided both were innocent.  One suspects the members of the jury had little doubt that the accused had in fact broken the law — but that they rather liked the idea of a Sunday glass of beer. The newspaper can be found on Google News. 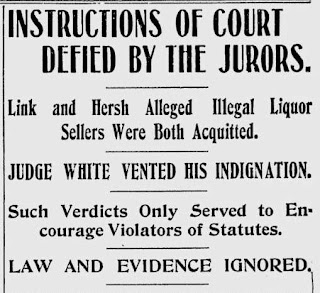 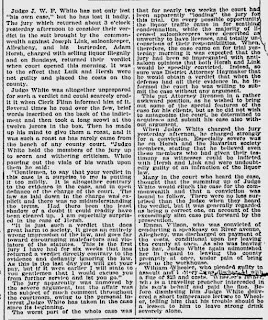 Posted by Randall Bytwerk at 1:52 PM No comments:

Email ThisBlogThis!Share to TwitterShare to FacebookShare to Pinterest
Labels: Crime

This cartoon from a Vienna newspaper is captioned: “The British Admiralty has been totally silent about the convoy sunk on 2 December. It would be a blessing for England if silence really were golden.” The Germans had in fact sunk eleven of the forty-nine ships in Convoy HX-90. 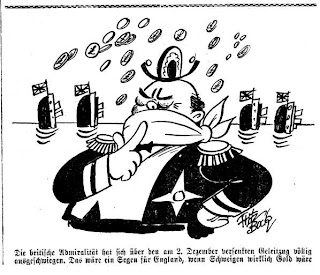 There was great fear of the Communists in the United States not only during the McCarthy Era, but also just after World War I. This article from the 4 January 1920 issue of the Milwaukee Journal reports on nation-wide arrests of radical elements with a tone that suggests the newspaper didn’t take the revolutionaries too seriously. I’ve included only the opening and closing of the article.  If you want the whole, it is available on Google News. 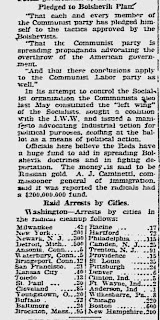 I’m particularly impressed by the estimate that the radicals had $200,000,000 to support their activities — a truly enormous sum in 1920 that would have bought a lot of bombs.
Posted by Randall Bytwerk at 7:19 PM No comments: